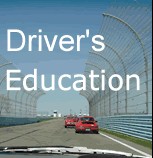 setting will likely include an introduction of the track, its turns and elevation. Teachers often provide special attention to difficult spots around the track and invite student questions. After each session, classroom sessions are a good place to ask questions and share your experiences at the track. Don’t be shy – your questions can help others!

Your First Run and “Hot Lap”

At first, it may seem like 20 minute runs are too short. Once you experience high speed driving and the amount of concentration it requires, you’ll agree that 20 minute sessions are plenty. In between your runs relax, drink lots of water, meet like-minded people, ask questions and watch the others at play. DE events generally have a great spirit of camaraderie.

One of the biggest treats of DE events are “hot laps,” where your instructor takes you in his/her car or yours at much higher speeds than you’re used to. It’s both exhilarating and terrifying. For some, it’s akin to a rollercoaster ride. Depending on how good of a passenger you are, I’ve heard stories of students having a great time or having to take a pit stop to throw up!

My first time at Mid-Ohio (second time at the track with the 996), my instructor (who also happens to be my brother) took me for a warm-up lap first thing in the morning. Some students had already complained of frost on the track, but he confidently said, “we’ll see about that.” Off came the PSM as we drove out and around the keyhole then down the long straightaway picking up speed. If you’ve been to Mid-Ohio, you know at the end of the straightaway is a right-hand turn that feels like 90 degrees. My instructor took that turn and the 996 decided it was time to behave like a 911. In seconds, that felt like minutes, out went the tail end and we were pointing in the wrong direction. I watched the instructor calmly correct the oversteer by countersteering, allowing the car’s rear end to come back to neutral, and then returning it to its path on the track. The experience was not frightening but exhilarating because it happened under controlled circumstances, with an instructor whom I trusted. My first reaction was, “I MUST learn to do that!” And the beauty of DE is that, with practice and an instructor’s feedback, you too can learn why your car behaves in a certain way and how to make corrections that can make you a better, faster, safer driver all around.

Make the Most of Your Experience

During breaks, you will have the opportunity to observe other run groups at play. The first thing you’ll notice is how much faster and closer to other cars more advanced drivers go. Unlike novices, intermediates and advanced drivers are allowed to pass all over the track, not just on the straightaways. Spectacular spin outs and the occasional accident are also much more likely. On my second DE, I witnessed a lovely 997 that flew off the track and had to be towed off the premises. Luckily the driver and instructor were both okay, but the 997 looked like it would need surgery. It served as a strong reminder that you can’t ever be too careful at DE events: explore but stay within your limits.

Attending at least one PCA DE event with your Porsche is highly recommended. Even if you don’t want to be come a race car driver and prefer to cruise with your car, a DE will give you an opportunity to experience why, beyond its beautiful shape, Porsches are one of the most revered sports cars in the world. You can drive around town and on the highway and never quite experience the limits and cornering ability of your car. Likewise, you can speed on a straight road, but never experience the car’s true braking power and acceleration out of corners. A DE won’t only make you a more confident driver, but an even more reverent Porsche lover.

DE events can be intimidating. But, like anything else, there is always a first time and everyone else there had their first time. Most DE s are offered through Porsche Club of America’s regions. These clubs are generally comprised of Porsche and driving lovers who are friendly and welcoming.

Don’t let the fact that you don’t yet own a Porsche deter you from participating in a DE. The first time I attended a DE, I was the very proud owner of a base VW Golf . It still had a bike rack on it and I had to take the plastic wheel covers off. The guys at the track ribbed me about my “air brake” but were nothing short of friendly and encouraging as I experienced the track for the first time. The track session was a complete blast and I learned my little Golf was capable of cornering quite well!

The only negative aspect of attending a DE is that, on your way home, you’ll wonder why people slow down so much to get on a highway’s on-ramp. And you’ll find yourself thinking about the line and a turn’s apex on your way to work. For days after, you’ll process what you’ve learned. And if you’re like most Porsche lovers, you’ll be back. See you at the track!

Today’s post was written by a member of the 993C4S.com group on facebook and PCA Zone 4 member, Valerie Roedenbeck. Valerie’s love of all things Porsche started when she received a ride home from the hospital in her Dad’s Porsche 1962 356 Super-90 Cabriolet. She acquired her first Porsche, an ’02 996 Cabriolet, last summer. Inspired by her brother, a longtime performance driver and DE instructor, she attended her first DE in 2001. She’s currently trying to convince her husband to add a Cayman S to the family.