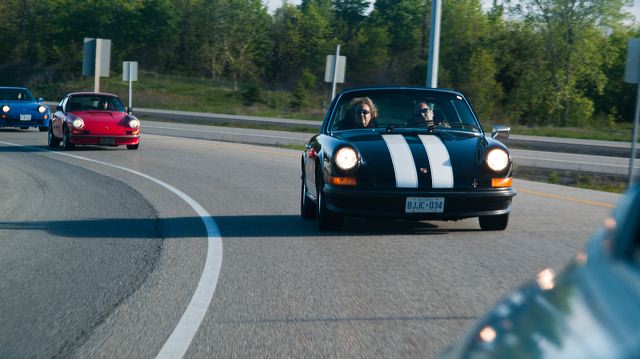 The May Coffee Run in the Ottawa area is traditionally the first of the season and is normally well-attended – first off, members are usually itching to get their cars out of storage and give them some exercise after a long winter and secondly, summer activities haven’t yet started to occupy weekend schedules.  This year, however, Paul Fecteau led the first-ever April Run, which was a howling success, so it was uncertain what kind of turnout we would have in May.  No need to worry- we had a great attendance with 15 cars and 23 members sitting down to breakfast.  And what an array of Porsches- 944s, Boxsters, and a variety of 911/Carreras from the early 1970s to present.  Also, Andy Evangelidas drove up from Montreal with his friend John for what may be another Ottawa Coffee Run first- a Cayenne.

Garth Gullekson attended and, as usual, took a number of pictures which are posted on the Rennsport website, and Paul Fecteau volunteered to “bring up the rear”.  Garth left his Porsche at home this time and rode ‘shotgun’ with me, snapping pictures out the window every time we had a good view of the following cars. Thanks to both of them for helping to make this run enjoyable!

Our route took us southwest from our Starbucks starting point to a quick pit stop in Kemptville, followed by a stretch along the Rideau River to Merrickville, then heading west to Crosby.  As Garth was my captive audience anyway, he came to appreciate my theory that there are several cars that look like Ford Crown Vics as they approach- Buicks, Hyundais even, and anything with a roof-rack, any of which can have me lifting off the gas pedal but we kept the speed in check anyway.

Although it’s not that far from Crosby to our breakfast destination in Westport, we took a detour north across the Narrows Lock of the Rideau Canal which is a tight winding road requiring one’s full attention.  As luck would have it, our last five cars didn’t see us turn onto the Narrows Road and headed straight for the restaurant, leading to the inevitable question- “what happened to you guys?!!”.  Steve’s Restaurant in Westport is always an accommodating host with lots of room to seat our group- whatever size.  The breakfast is tasty, the price is right, and great conversations are the special of the day.

Leaving Westport, we headed northwest through Althorpe, Perth Tay, Lanark and Almonte before heading back to Ottawa.  Every year we have had Coffee Runs through this region, but because there are so many excellent roads to choose from, it’s possible to chart a new route with almost no duplication of roads from previous years. We recently conducted a survey of members for their views on what works (or not) during Coffee Runs, and what suggestions people might have to improve the events.  Most of the respondents like the current formula and generally prefer not to change it, however there were some interesting comments that may see some variations on the theme in the future.

We were also fortunate to have several new members joining us for this Run, and by all accounts they had a ball.  It looks like we’re off to a great start to the season, promising to be well attended and attracting new and old members who haven’t done Coffee Runs before, along with our dedicated regulars.