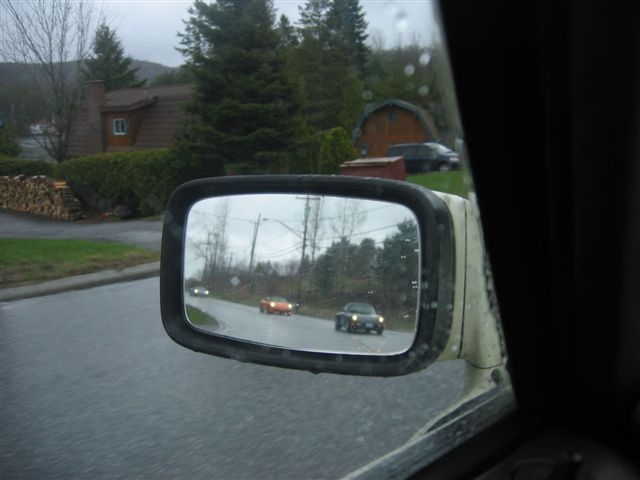 The usual suspects met in late March for the annual RSR Ottawa coffee run organizers meeting. Having one extra volunteer, and with the an early spring looming, I floated the idea of starting earlier this year. So, it came to pass that we scheduled the first run for mid-April, the first Ottawa coffee run to be held so early. Yours truly was behind the wheel to organize the run.  I was tempted to pull an old run out of my bag of tricks, a run with a lot of twisty road that my neighbour and I drove on Easter weekend. However, it is a touch on the long side and I was expected back in Ottawa in the early afternoon. So, I started looking for other options. I had always wanted to find a way to do a loop on some of the inviting roads in Quebec, but couldn’t find one the right length.  While looking on Google Maps I found a nice loop made possible by an Ottawa river crossing I had not known about.  Finally, I had a plan, pre-drove the route and started getting the word out.

Saturday morning of the run did not look overly encouraging. Showers mixed with not-overly-warm temperatures left me wondering if there would be much of a turnout. I pulled into Starbucks around 7:10am to find several cars already there waiting for me!  We enjoyed coffees, tall-tales, and had a quick photography session.  The antipation in the group was palpable.  By 7:30am we had nine drivers and five passengers raring to go.  We headed east towards Cumberland and took a quick ferry ride across the Ottawa river.  Participants and spectators, alike, enjoyed the site of the 9 Porsches loaded on the ferry – we had a great selection from Boxters to 911s, 70’s  cars to very modern ones.  After arriving in Quebec we headed north towards Val-des-Bois.  As we went through Buckingham a few of the tail end cars got caught at a red light then missed a right turn. While the front cars pulled over to let them catch up, a white van coming the other way stopped and the driver got out. He walked across the road and asked me if we were a club.  He said he had an ’86 Carrera and was always looking for other Porsches to drive with.  So we gave him instructions on how to reach PCA and hopefully our little stop results in a new RSR member.  In a few minutes we were back on the road.  The light drizzle was accompanied by light traffic, and we made the best of it.  The riverside road was a gently curving one past farms, and pleasant scenery.  At Val-des-Bois we began to head south.  Here the road was a bit more challenging – a tight little roller-coaster of a section.  We drove past Val-des-Monts and more great waterfront vistas.  Next, we headed into Wakefield.  Everyone seemed in great spirits, despite the light drizzle, and we went for brunch overlooking the Gatineau river.  After a nice breakfast with more enthusiastic talk we headed south back into Ottawa.  It was a great start to the coffee run season, and I’m very much looking forward to the next event in May.  Whether you are a familiar face at coffee runs, or haven’t done one yet, I hope to see you at one this summer. It is a great way to socialize with other club members, find some great new roads, and drive your Porsche!