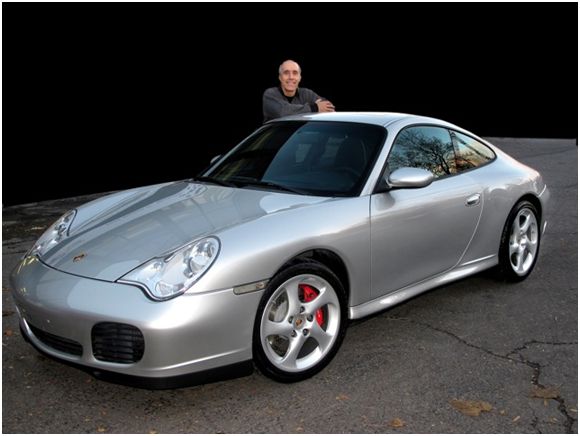 For two weeks, I scoured the internet for information and pricing, and after engaging an expert in locating automotive exotica, we soon found a gorgeous 996 C4S. Fully optioned, this US car had had an IMS bearing failure just before its warranty expired, and a new engine had been installed by Porsche in 2007. This positive omen, the Arctic Silver color, and the Metropol Blue full leather interior, sealed the deal! I had recently encountered a childhood friend who had a 911, and he had become an expert driver and PCA instructor. Ken convinced me to join the Porsche Club of America, and to take Driver Education training. Â I soon after became a member of the Québec chapter of the PCA, Rennsport.

Initially, I was intimidated and skeptical about the wisdom of risking my gorgeous new acquisition on a racetrack. I was constantly reading about driving technique, and the evolution of the 911. The more I read about the value of learning how to drive ‘for real’, the more excited I became. Clearly, I was investing a great deal of emotion in my burgeoning Porsche experience. I was even able to convince my reluctant dentist friend to join, and to participate in DE with his C4S cabriolet!

As the first event approached, we nervously followed the weather forecast, and to our chagrin, this first session threatened severe rainstorms. We arrived at a very wet Circuit Mont Tremblant race track, and after an intimidating drivers’ meeting, we met our instructors. I borrowed a helmet from one of the ace drivers, and found that I could not place my progressive glasses properly within the narrow window of this racer’s carbon fiber helmet. One eye seemed to be stuck on the reading focal length, the other eye was on distance. This condition rendered me virtually blind! In the excitement of the moment, I rationalized that my glasses were primarily used for reading, and that the distance correction was minimal, so I began to drive without them.

This proved to be my undoing!

Knowing that one drives with an open window, and fearing that my immaculate, freshly Lexoled blue leather interior might get wet, I had meticulously covered the interior of the car with plastic sheeting. In the very first lap, with the wind whipping the plastic about, my instructor directed me into the pits where we removed the noisy, slapping plastic sheets! I suppose it was comical.

As we drove onto the track, with the windshield wipers flapping madly, I could barely contain my terror. The instructor calmly guided me along, though I could barely follow his instruction, convinced that I would be unable to navigate the turns, and end up crunched against the wall! Turn after turn, the car glided through the turns, and I was amazed at the traction and capability of this highly evolved machine. To this day, I vividly recall that experience and how valuable it was in giving me the confidence to seek the enormous potential of these cars and tires. This is the essence of the PCA driving instruction, and I am now a much better driver, under all circumstances.

The day did not unfold as I had hoped.

The rain was torrential, and I could only recall tales in Road & Track of Jackie Icks enduring the same at the Nürburgring! Time after time, my instructor was forced to firmly take the wheel, and counsel me to use the ‘vision technique’, and to brake earlier. I kept coming into the turns far too fast!

After the day ended, and my instructor had voiced his great frustration with my inability to turn properly, I sought the chief instructor, and mentioned my problem. The next day, I went out with another instructor, who had similar issues with my inability to enter the turns reasonably. For the last session, I returned to my first instructor, but after a severely missed turn onto the grass, he motioned me off the track, suggesting,

My humiliation was profound! I was overcome with panic, fearing that I would be deprived of the experience altogether.

Sunday night, driving home, I was miserable, fearful that this much anticipated Porsche experience was beyond me. It was very frustrating, yet mysterious, particularly because of my previous experiences riding motorcycles, skiing and bike racing. I was convinced that I had the potential to drive well, but I could just not seem to grasp the ‘Vision Technique’, of looking far into the turn, approaching the corner on time, and executing a smooth turn.

Tuesday morning, while driving my Acura in sunshine, and wearing my progressive glasses, I kept trying the vision technique, looking far into the corner, and trusting the trajectory of the car. Time and again, I seemed to be ‘getting it’, yet I still could not understand the difficulty I had had on the track.

To replicate the track experience, I removed my glasses and the difference was immediately evident! Suddenly, the corner appeared FAR away, and it seemed that I had forever to get there. I realized why I was coming into the turns so ‘hot’. Without the spectacles, they seemed about 400 meters farther away!

Desperate to continue with the driving experience, I scheduled an eye examination, and ordered new, single focal length driving glasses. Then, I ordered a Bell helmet with a larger opening, specifically designed for spectacle wearers.

I wrote a sincere letter of explanation to the chief instructor, pleading for another chance. His response was less than reassuring.

“Your status is “Wait List” for this upcoming event. The reason is that I need an instructor who is willing to teach you.”

As the next DE date approached, I registered, hoping that I would be given a second chance. Obviously, the word was out, and I was considered a “write off”. Graciously, the head instructor took me under his wing, and offered to take me around in the first session.

Now, wearing my new glasses, perfectly placed within the larger window of my new helmet, we entered the track under sunny conditions. The experience was completely different from before. Though crude, I was hitting apexes on line, braking appropriately, and generally progressing well. The instructor was very encouraging, and I was overjoyed. No, I was ecstatic!

Many sessions later, while reviewing my track time with the instructor, he offered a now famous quip,

“Joe, DE tracking is not really an activity for the blind!”

I spent the rest of the season with the same instructor in the GREEN Run Group, and with his patient, and excellent guidance, I improved constantly. In the last event of the season, I received the approval and endorsement that I so desperately craved.

I was ‘signed off’ to drive ‘solo, in the WHITE run group, and I enjoyed the last 3 sessions whizzing around Circuit Mont Tremblant, realizing my childhood dream!